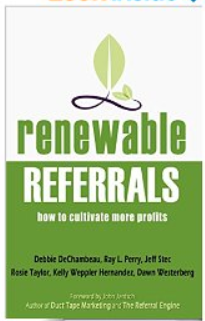 A profitable read. I was intrigued when I first read heard about this book because it's written by 6 coach/consultants trained by marketing guru John Jantsch. Ha! It was worth the read just to see what 6 such people would agree on!

My two biggest take aways the first two times through -

1. Pages 18, 19 "With referrals you'll lower you costs of sales." That's a simple, true and brilliant statement. Unconsciously, everyone knows that, but we need to be aware of it every day. Great daily focus for me moving forward.

Creativity breeds clutter. Let it be!

I've been moving pretty fast and hard the past few weeks and this morning I noticed that I'm much more organized! Meaning, there's less clutter all around me.

"The clutter rushed in late yesterday. Actually, it snuck in and slapped me. Some things I'd rushed on 2 weeks ago started coming apart, I overbooked myself late in the day (knowing I was doing so) and when I finally decided to shut down last night my desk was a mess. Maybe that's the way I just function."

I'm more energized when the clutter is gone, when I'm creating (we were created to create) and cleaning.

I woke this morning thinking how much of a "lid" this is to my ability to really get things done. Reflecting back over the past few days I'm not only accepting, but understand, (Maxwell's Law of the Lid).
So, today is like everyday; practice the process of creating, cluttering, de-cluttering

And pay attention to Cathy when she says "focus. Hey! FOCUS."

To that end....I pray "Lord, grant me the serenity to accept the things I cannot change and bring others along side me that can fill those gaps that can be filled, give me the courage, strength and energy to make a positive impact where I can, and wisdom and discernment to know the difference. Please Lord, give me my daily bread, living not just one-day-at-a-time, that can be too long, but one moment-at-a-time, putting one foot in front of another - trusting you with each step. Amen"

Ha! Another realization - I've got Someone that can help.

To that end......let it be said you've been #SpeakingGreatness
No comments:

There's a lot of "stuff" going on about Purpose, Mission, Vision and Calling. What one means to you can be quite different than mine. Subsequently, Mission to me has been the same as Purpose or Vision how you've used it.

Just trying to explain the confusion is confusing. I'm reminded of an English 101 course I took through the University of Hawaii during my Navy stint. I used "drinking" in a paper and while I was referring to "drinking alcohol," the Professor had no clue. In her culture drinking was drinking; pouring a liquid down one's throat. I received a F.

To that point, I'm re-purposing my terminology to be more specific and hopefully achieve congruency. Simply put....

1. I'm dropping any official use of Mission

2. Vision: a present view of the future.

3. Calling: how "I'm called according to God's purpose."

4. And finally........Purpose; whether an all-in/life-plan Purpose, or the Purpose for setting down to write this blog post. Purpose. What's my/your Purpose for "x."

Thanks to Jeff Boss at Entrepreneur Magazine for this great article.

10 Phrases Seal Teams Don't Accept, and Neither Should You

Click her to read the entire article on Entrepreneur

All 10 are good, but these 4 have a special place in my heart!

It’s a great day! If you’ve ever called me, you know that’s something I say every time I answer the phone…

“It’s a great day, this is Danny Smith.”

I started saying that in 1991 because Zig Ziglar told me to. Seriously, he pointed at me and said “if you want things to change, you need to change and it might start with something as simple as the way you answer the phone.”

Ok, I’ll admit that I was one of 40,000 in the Hoosier Dome but I swear he pointed RIGHT AT ME. He really did.

Rivers, lists and someday is today


Cathy’s gone for a few days on a mini-retreat and if you know Cathy you just went WHOA! because you know she doesn’t do retreats. But nothing Earth shattering. By “mini” I meant just her and a friend.

I’m with her though, not at her retreat but with the whole retreat thing….not for me either. Yet, as I wrote this, I remember it was at the only retreat I’ve ever been to (1990) where I heard Dr. Chris Thurman speak on his book “The Lies We Believe” and my life was changed. Seriously. There have been a small handful of books that have made a profound difference in my life and this is one.


I recently finished up the study of John Maxwell’s book “The 15 Invaluable Laws of Growth” (it is also in that handful) with a lunch and learn group.

This is my 11th time through the 15 Laws with groups of people but it’s by far the most meaningful. Not just because I’ve come to each time through different than times before, which is true, but because we took our time (1 law/chapter per week) AND the group has been very engaging.

The last lesson was on The Law of Contribution; Growing Yourself Enables You to Grow Others. John talks about being a river, not a reservoir, questions that identify who can encourage us, being grateful, not letting stuff and people own you, and to keep growing you need to keep giving.

The chapter also talks about success being defined as sowing, not reaping.

Tim Hawks, my pastor at Hill Country Bible, is leading us through a series of sermons the past few months titled “Life to the Full,” “Waiting for Someday,” and now “One Mission.” They’ve been about Rivers, Someday is Today, and Generous Giving….at least that’s what I’ve gotten from them........

.......contributing, living abundantly, being purposeful and having the right mindset.

Back to Cathy being on a retreat…..when your spouse leaves for a few days, does she/he leave you a list of things that need to be done? I’m not talking about honey-do stuff, but a checklist for each day: feed Bubba x amount, Cats x this and x that, fresh water in dishes………?

Cathy does. And you know what? I love it. I don’t have to think about what I need to do because I have a list and you know what else? I’m much more likely to get things done. She’s managing me! Now that’s a lesson out of another great book, E-Myth – every visionary needs a manager and the visionary’s life becomes a better flowing river.

To that end…..make today someday and live life as an abundance filled river,

Some things I just do..everyday (even if I miss a day)

I ran across an old blog post that reminded me of some changes I've made to my Daily/Everyday To-Do List.

There are certain things I need to do everyday, though I do miss a day here and there.

And I'm now prepared for the day.
These are not all habits, but choices I make to eventually develop habits and build myself out in front of my business so I can have the freedom to live life and not live "in" my business.
1 comment:

Responses vs Answers, and old friends


I love hearing from old friends and one showed up in my inbox recently. Roy Whitlock replied to a blog post I wrote about roadblocks and blindspots where I stated “Perfectionism or Getting ready-to-get-ready (anything worth doing is worth doing poorly until you learn to do it well).”

Now, to begin with, I can see Roy walking into my office and asking “I understand getting past roadblocks - but how does one find one's own blind spots? For example, #10 - how do you determine the point where "Getting Ready" becomes "Getting Ready to Get Ready"? And if something is worth doing, isn't it worth doing well? Won't doing it poorly start to reflect on your service delivery?”

Roy and I used to have some really good conversations. LOL……As to his plethora of questions (he never had just one and I’m surprised he only asked about one of my points)….here’s my response  -
CONTINUE READING >>>>>>>
No comments:

Complete Questionnaire-I'll Be In Touch

Since 1984, Danny's goal has been to make a difference in the community that he serves through home ownership and helping people build themselves out in front of their businesses.

A Certified Mortgage Planning Specialist and a Certified John Maxwell Team coach, Danny has in intensity for helping people.

His guiding principle is to seek excellence and do his best work for God’s glory and the good of others. Danny's reputation and trust with his business partners leverages his use of knowledge and experience to methodically create solutions that best aid the client.

If I accept you as you are, I will make you worse; however, if I treat you as though you are what you are capable of becoming, I help you become that. - Wolfgang von Goethe Johann

The measure of leadership At the end of the day, leaders make a difference. The world is changed because of their leadership. They are able to create real and lasting change. Unless something has shifted, they aren't leaders. They are only entertainers.

Hurdie Burk hurdieburk.com Home of the Video 6-Pack (via LinkedIn) Danny is a great Leader. He is one of the few people I know who works very hard to promote others. He is a true helping hand. I highly recommend using Danny......
Gary Blackman - With most seminars, attendees "lose it" on the way out to the parking lot. They fully intend to put some of what they learned into practice, but then it's back to the office to resume the continuing crisis.

Your Marketing Workshop is different. The information you presented is 100% relevant, even in today's fast-changing business environment. Your rapid-fire presentation held my interest straight through and your promise of several weeks of follow-up interaction will keep me engaged. This was money well spent. Thank you very much. Needless to say, I have a keen interest in a one-on-one meeting with you. I need to learn more about the services you offer. Thanks again for a great seminar. I look forward to your follow-up information and training that comes with the workshop.

Gary Seale (via LinkedIn) - I've used Danny Smith as a Consultant/Coach and as a testing provider. He has shown me a deep insight into the dynamics of work relationships. In addition, the tests results regarding my career path choice were affirming and correcting at the same time. I can unequivocally recommend Danny Smith to your organization to improve efficiencies, relationships and productivity. Use his knowledge and experience to your benefit.

Dan Cunyus (via LinkedIn) - We have had the pleasure of working with Danny for the past years, and know him to be a highly energetic and ethical man. Danny is particularly skilled in marketing and motivational matters. His advice and coaching are welcomed additions to our efforts.

Mike Grimes (via LinkedIn) - I have had the pleasure of knowing Danny since 2000....Of all my mentor experiences, Danny stands head and shoulders above the rest in the areas of character, integrity and leadership....

Donny Hunter (via LinkedIn) - ...Danny has a passion to help people improve their lives. He is a great trainer and enjoys mentoring....