The 7Ps of Picking the Right Employer

What do sales people look for in an employer?

Dualism in the Christian Era, by John D. Beckett

From "Loving Monday," by John D. Beckett
The Greeks couldn't get away from the concept of "dualism"—the idea of higher and lower planes of ideas and activities.
Plato was the clearest on this. He sought to identify unchanging universal truths, placing them in the higher of two distinct realms.
This upper level he called "form," consisting of eternal ideas. The lower level he called "matter." This lower realm was temporal and physical. Plato's primary interest lay in the higher form. He deemed it superior to the temporary and imperfect world of matter.
The rub comes when we see where Plato placed work and occupations. Where, indeed? In the lower realm.
Nearly a thousand years later, in the fifth century A.D., Augustine sought to merge Platonic thought into a Christian framework. This approach resulted in a distinction between "contemplative life" and "active life"—the same distinction between higher and lower, but with different names.
The higher of these realms came to be equated with church-related concerns that were considered sacred, such as Bible study, preaching and evangelism.
Other things were secular, common, lacking in nobility.
Where did Augustine place work and occupations? As with Plato before him, in the lower realm.
Thomas Aquinas, in the thirteenth century, furthered this derogatory notion of work as he perpetuated the dualism of Greek thinking. He also categorized life into two realms, which he called Grace and Nature. Revelation, which gave understanding to theology and church matters, operated in the upper realm of Grace.
In the lower realm of Nature, man's "natural" intellect stood squarely on its own. Business and occupations, operating in the lower realm, didn't require revelation.
According to Aquinas, they survived quite well on a diet of human intellect and reasoned judgment.
Now we bring this dichotomy up to the present. Francis Schaeffer, one of the modern era's greatest thinkers, wrote on the more recent impact of dualistic thinking. In A Christian Manifesto, he speaks of the flawed view of Christianity advanced through the Pietist movement in the seventeenth century.
Pietism began as a healthy protest against formalism and a too abstract Christianity. But it had a deficient, 'platonic' spirituality. It was platonic in the sense that Pietism made a sharp division between the 'spiritual' and the 'material' world—giving little, or no, importance to the 'material' world.
The totality of human existence was not afforded a proper place. Christianity and spirituality were shut up to a small, isolated part of life.
The result of such a view is that the activity of work is removed from the sacred realm and placed squarely in the secular—making it "impossible" to serve God by being a man or woman in business.
To me, this is a startling revelation!
Now here's a question for you. Has this view affected you, as it has me? Second-Class?
I can now see that the perspective of the Greeks, established so many years ago, continues alive and well to the present day, influencing and distorting our perception of work.
For years, I thought my involvement in business was a second-class endeavor—necessary to put bread on the table, but somehow less noble than more sacred pursuits like being a minister or a missionary.
The clear impression was that to truly serve God, one must leave business and go into "full-time Christian service." Over the years, I have met countless other business people who feel the same way.
The reason is clear: Our culture is thoroughly saturated with dualism. In this view, business and most occupations are relegated to the lower, the worldly, the material realm. As such they are perceived to lack dignity, spirituality, intrinsic worth, and the nobility of purpose they deserve.
Schaeffer, looking back over the legacy of nearly three millennia of Greek thought, proposes this radically different view of true spirituality: It is not only that true spirituality covers all of life, but it covers all parts of the spectrum of life equally. In this sense there is nothing concerning reality that is not spiritual.
Indeed, there is a dramatically different way to view the world and our work—a view that liberated me to see business as a high calling. But to find this view, I had to look through a different window.
This text is from "Loving Monday," by John D. Beckett, pages 67-69 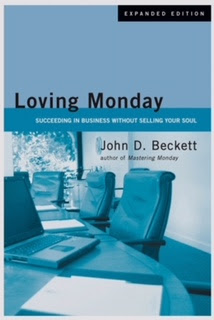 Your score isn't impacted when you check your own report. It's only affected if a potential creditor checks your credit. These include department stores, as well as credit card, auto finance and mortgage companies. Here are three steps you can take to improve your credit score in this area:
Also, keep in mind that any new credit or new credit inquiries can raise a red flag when you’re in the middle of a loan application.  That’s because mortgage lenders are required to look into this, and the possibility of new debt could endanger your ability to get qualified for a home loan.

Let me know if you have any questions or if I can be a resource to you in any way!

Since 1984, Danny's goal has been to make a difference in the community that he serves through home ownership and helping people build themselves out in front of their businesses.

A Certified Mortgage Planning Specialist and a Certified John Maxwell Team coach, Danny has in intensity for helping people.

His guiding principle is to seek excellence and do his best work for God’s glory and the good of others. Danny's reputation and trust with his business partners leverages his use of knowledge and experience to methodically create solutions that best aid the client.

Complete Questionnaire-I'll Be In Touch

If I accept you as you are, I will make you worse; however, if I treat you as though you are what you are capable of becoming, I help you become that. - Wolfgang von Goethe Johann

The measure of leadership At the end of the day, leaders make a difference. The world is changed because of their leadership. They are able to create real and lasting change. Unless something has shifted, they aren't leaders. They are only entertainers.

Hurdie Burk hurdieburk.com Home of the Video 6-Pack (via LinkedIn) Danny is a great Leader. He is one of the few people I know who works very hard to promote others. He is a true helping hand. I highly recommend using Danny......
Gary Blackman - With most seminars, attendees "lose it" on the way out to the parking lot. They fully intend to put some of what they learned into practice, but then it's back to the office to resume the continuing crisis.

Your Marketing Workshop is different. The information you presented is 100% relevant, even in today's fast-changing business environment. Your rapid-fire presentation held my interest straight through and your promise of several weeks of follow-up interaction will keep me engaged. This was money well spent. Thank you very much. Needless to say, I have a keen interest in a one-on-one meeting with you. I need to learn more about the services you offer. Thanks again for a great seminar. I look forward to your follow-up information and training that comes with the workshop.

Gary Seale (via LinkedIn) - I've used Danny Smith as a Consultant/Coach and as a testing provider. He has shown me a deep insight into the dynamics of work relationships. In addition, the tests results regarding my career path choice were affirming and correcting at the same time. I can unequivocally recommend Danny Smith to your organization to improve efficiencies, relationships and productivity. Use his knowledge and experience to your benefit.

Dan Cunyus (via LinkedIn) - We have had the pleasure of working with Danny for the past years, and know him to be a highly energetic and ethical man. Danny is particularly skilled in marketing and motivational matters. His advice and coaching are welcomed additions to our efforts.

Mike Grimes (via LinkedIn) - I have had the pleasure of knowing Danny since 2000....Of all my mentor experiences, Danny stands head and shoulders above the rest in the areas of character, integrity and leadership....

Donny Hunter (via LinkedIn) - ...Danny has a passion to help people improve their lives. He is a great trainer and enjoys mentoring....